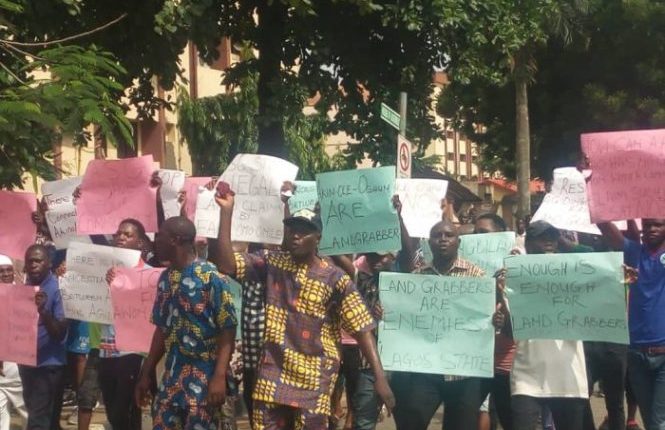 Hundreds of residents of Agidingbi in Ikeja Local Government on Thursday stormed the Lagos State House of Assembly to protest the judgment of the Supreme Court which granted judgment in favour of the Akinole Oshiun family to take possession of 398 acres of land in the area.

Over 2,000 properties in Agidingbi, Acme Road and part of Magodo are affected by the judgment and the Akinole family has placed takeover notices in all affected properties, issuing seven days notice for residents to vacate their homes.

Early on Thursday, hundreds of Agidingbi residents marched from the area with placards to the Lagos State House of Assembly to express their grievances and delivered protest letters to the lawmakers and the state government.

The protesters were chanting solidarity songs, saying “Akinole, ole, Akinole ole.” They carried several placards, some of which read: “There is no ancestral connection between Akinole and Agindingbi, “LASG, stop illegal land grabbers,” “Akinole Oshun are land grabbers, “Land grabbers are enemies of Lagos State,” and “Enough is enough for land grabbers.”

In a letter delivered to the lawmakers, the Baale of Agindingbi, Ganiu Ayinde Aruna, intimated the state government and the Assembly of the looming danger, threats and action being orchestrated by a family called the Akinole-Oshium towards causing mayhem, as well as disturb the peace of the community.

“This threat is aided by some compromised security agents who accompanied them to threaten the lives and properties of inhabitants of the state on the 26th of April, 2019.

“Although, it is no longer hidden fact that the Aleshinloye Family owns Agindingbi land, under acquisition of the state government, yet it is strange to see that the Akinole-Oshiun Family lays spurious claims of the whole land in the community, with threat to destroy the properties of the inhabitants in the community as well as to bulldozed and destroy buildings in the community within seven days,” he said.

According to him, this threat was said to be founded on claim of judgment obtained, to be enforced on the properties within the community, adding that as law-abiding citizens, the community would not want to take laws into their hands.

He called on the state government and the lawmakers to intervene in the matter in order to avoid crisis.

Speaking on behalf of the protesters, Wasiu Bolaji Seidu, a council legislative member, said Agidingbi had been in existence for over 200 years and that it was not possible for somebody to just wake up to take over the land based on a court judgment that never got them involved.

He said Alhaji Okunnu, the late Abibat Mogaji were part of Agidingbi as well s their great-grandfathers, asking the state government and assembly to intervene in the matter to avoid bloodshed.

The Iyalode of Agindingbi, 83-year-old Evangelist Dorcas Modupe said she was born in the area as well as her great grandparents, saying that the Akinole family could not just come from somewhere to lay claim to ownership of the land.

Receiving the protesters, the Deputy Majority leader, Olumuyiwa Jimoh said the Assembly would look into the matter and get back to the community.

He said after looking into their letter, they would be invited by the House to find lasting solution to the matter and appealed to them to be peaceful and not take laws into their hands.